UA Ruhr initiates a wealth of collaborations among universities in the fields of research, academia and administration with the aim of cultivating, promoting and strengthening the economic region Ruhr. Its bottom-up approach has proved successful, as the UA Ruhr has emerged and grown organically following concrete projects performed in individual disciplines and faculties. 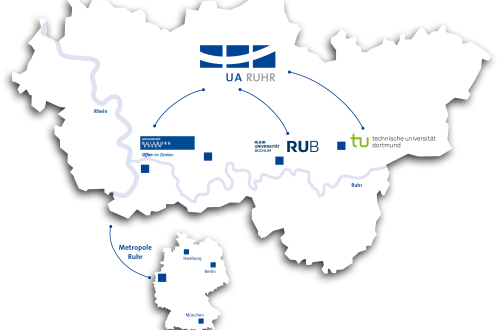 This is why the UA Ruhr has succeeded in recruiting an increasing number of institutions at its universities for its collaborative endeavor and in promoting the idea of the University Alliance among its members. An inter-university culture of collaboration linked together by complex structural ties has thus emerged.

Since our foundation in 2007, the UA Ruhr cultivated and exploited the interdisciplinary advantages of its geographical vicinity to the large universities of the Ruhr Area and their academic diversity and to expand the alliance in an ongoing process. Its strategic goal is still to establish UA Ruhr as a center of excellence in the national and international scientific marketplace.

Our shared vision is to foster research and scholarship within our network of academic excellence and to promote the transformation of the entire Ruhr Area into one of the leading science, research and cultural locations worldwide. To this end, a new framework cooperation agreement was approved by the Coordination Board of the UA Ruhr in March 2017.

The Coordination Board controls the strategic orientation and further development of the UA Ruhr. Its members are the rectors and chancellors of the partner universities, who regularly discuss the general conditions, fields of cooperation and future projects.

An important source of impetus for the further development of the UA Ruhr is the top-class Research Council, whose members work on identifying further common flagship programs and research fields in which the University Alliance already belongs or can belong to the national and international top group, either now or in a few years' time. The Research Council consists of 15 renowned scientists from the UA Ruhr, including the three Vice Rectors of Research.

Both boards are supported by the central office of the UA Ruhr. It accompanies, coordinates and initiates new cooperation projects, acts as the first point of contact for internal and external interested parties and is responsible for the external representation of the University Alliance Ruhr.

About the Metropolis Ruhr

Over the past decades, the Ruhr Area has become one of the most important centers of education and science. Five universities, 18 colleges and many other non-university research institutions have contributed to the transformation of the former mining and industrial agglomeration into the fascinating and innovative science region Ruhr. The modern Ruhr Area with its more than five million people is green, cosmopolitan and enthusiastic about culture: old industrial sites have been turned into monuments and serve as venues for various, even international, cultural and musical events. Approximately 200 museums, 120 theaters, 100 cultural centers and 250 festivals per year make the Ruhr Area a vibrant metropolis that attracts many international visitors.

Many of the largest companies in Germany are based in the Ruhr Area. Increasingly, they are seeking contact with the numerous local universities and colleges in order to make even greater use of their potential for developing future-oriented products and applications. In addition, more and more innovative companies are emerging in the vicinity of the universities, which has led to the development of a lively and creative start-up ecosystem. Where coal was once mined, knowledge is now being promoted: The Ruhr Area combines business and science, nature and culture - it's worth studying, working and living here!